Is this the bar on the harbour front next to crackers bar ? we were drinking at bernies every night, great tunes and great staff, shooting everyone, playfighting, joking. was a real gem, hope that the bar is still going!

Seems such a long time ag since I blessed this bar with my knowledge of R&B. R&B is without doubt the future, I adore this type of musice, I mean,,,, who the fook are Guns n Roses anyway? Who are The Stone Roses? who says 'The Rollin Stones' are a good band who truely understand a good beat??!! The Rollin Stones smell of fish!! and that Keith Richards isnt PRETTY!! Fook U Charlie Moon!! And Ronnie Watts! ... and the other fooker!! This year I will dance with the moonshine on a sea of mystery. Red Indian chief will guide my vissions! See you all this year my Brothers (Male and female)!!

Twas one hell of a hot and humid day as i slouched against the bar waving the flys away with my rubber wand. A pickled onion rolled along the bar gathering ash, i looked up to see Adam opening the fridge wearing a suit of rusty armour. He bit off an orange breezer cap with his teeth, swallowed it and then dropped the full bottle into the bin. By now things were starting to get nasty as Adam escorted captain rum into the bathroom and ......await the next chapter guys.

i think now, looking back, wearing an octopus wig and smoking a aboriginal pin pipe did suit barnacle bonce adam. i remember mocking this species one morning as he sat smoking dried sea horse s**t. his eyes rolled like a troubled ship in a force 10 gale as i leaned across the bar grabbing my 'next' cigarettes. a tentacle detached from adams wig making its way toward the opened till. like a true pirate his wig was highly trained in till dipping. aaarrrggghhhhhh cried i as i slammed a bottle of cheap rum over adams head!! he landed with an almighty thump in a heap that resembled a nude bernard manning. his octopus wig dived into the sea screaming 'to the sea'... 'to the sea' 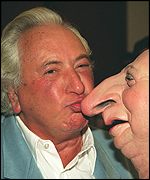 we all claim to know one and we all have a friend of a friend who knows one better than most. i'm not talking about sex monsters who bum people to death in swimming pools whilst under the influence before f**king off to new zealand and hiding, nor do i speak of tramps with cashew nut sized bulb ends who would give their front teeth to be let loose in a pickled onion factory. i am talking about the salt of our earth, british celebrities. i met many celebs whilst working in greece but one encounter stands out above all the rest………….

multi-billionaire food critic michael winner was spotted dining out in kardamena, kos last year with a group of friends. the port nosed pigs choice of venue did come as a huge shock to me as i was under the impression that jakes restaurant had closed it's doors to the public five years ago.

clearly relaxed and sporting a tea bag coloured t-shirt with the slogan "pork stock warrior", sprawled across it mr winner seemed to be in his element as he laughed and joked with the group clearly unaware that his poorly chosen restaurant was closed down in 1998 after reports of bull buggery within the workplace.

this is not the first time that jakes restaurant has come under the spot light for all the wrong reasons as in 1991 jake decided to head out along the harbor front to promote the place. a few greek families and bar owners were deeply offended that day as jade walked around with a tray piled full of hotdogs covered in a variety of home made relishes. this may all seem innocent enough but there as an uproar when a bar owner who wishes to remain anonymous tried to take one off jakes tray only to find out much to his horror that the mustard smothered hotdog was attached to jakes body. his trouser fly was unzipped and the unbelievable had become a sordid reality. jake was beaten and locked up over night only to find his restaurant burnt to the ground the following morning.

winner who writes a column for the respectable times newspaper ordered a "roast of the day" which consisted of tinned carrots, wafer thin slices of pre-cooked beef, half a cauliflower and a frozen yorkshire pudding the size of a ball bag and a smothering of lukewarm, transparent tasteless gravy. to top this off greedy winner apologized to the group on ordering a second helping of apple strudel as he flossed his teeth with on of his very own silver pubic hairs.

renowned for his fine tasted and choices within the restaurant world it comes as a surprise to me why he would choose to dine out in a rat infested back street soup kitchen such as jakes.

i would suggest that mr winner should rinse his mouth out in his very own dirty bathwater before taking a toilet brush and scrubbing his teeth with dog s**t. with luck this should resurrect those precious taste buds of his that the nation have grown to depend on.

Superb news.... Lee and Andy may be back this year, bouncers now!! How cool would it be to see them both working together. Awsome.... thanks for the pic guys, hope you dont mind me putting your pic on this site.

Rejoyce   He returns, alive and wonderous!

see you soon bernie, this ones for you.

What the fook is the problem regarding this Russian Spy Alexander Litvinenko (the poisioned spy from Russia)! I (Bernie) have sent people from Bernies bar looking far worse than that fookeing mongol! At least he has still got his fooking eyebrows and ball hair!!  Oopss..... sorry Just heard he's died. FOOT IN IT!!

How could I forget that wise old man Andy.... King slug.... the man that wallked away with the bigest prize in Kardamena.... CLAIRE!!!!!

Â
THESE TWO YOUNG LADIES WANT TO BECOMR REGULARS!!!!
Â
Thanks for letting me take this pic of you Andy!! You didnt have to dress up for the reunnion!
Â

to all you people this place pass by,

remember bernies for he is a japs eye,
his trumbone c**k is made from steele
and the blue eye of a bulbous seal,
View 31 posts by Bernie

hello again friends. i miss greece so much and i am so hungry for it's hot, atmosphere. just want to say hello to everyone i once knew out there!! i miss the greek friends, greece is a world leader in my eyes, laid ba

ck, friendly, volitile, passion filled, and confident!! andy from leeds.... what the f**k do you think your doing!! you cant use cillet bang as toothpaste you silly bloody bugger! and lee (worzel gummidge) stop using 'manky w**ks' kettle descaller as mouth wash, your teeth have been condemed by the nhs s**t teeth squad!! ihear that adam 2003 (most usless fooking pr ever) has taken to rubbing glue on his baldy head and rushing into barber shops and spinning on his head to collect cuttings for his disgraseful baldy head!!

twas one late summer evening as i guzzled mythos like it was going out of date, as i sat at the front table of bernies on his retro seating i glanced at the sun dying behind the mysterious mountains, and then it dawned on me, not straight away but very slowly ..... i was a drunken disgrace and i had no idea where i was staying, as per usual.

how glad i was to see trombone c**k and putty foot coming at me in an old melon truck.
1 post by Quincy L

What ever happened to the ape man? Barnacle bonce? Swimming cap head? The wrost PR in the history of PR'ing? ADAM..... where the fook are ya matey?

View 31 posts by Bernie B

hello all, bernie here.... i sooooo miss everything and anything to do with kos!! even the sea front b***hing! got engaged in kos last year, had a great holiday too (cheers aussie bill, chris, chris, tatoo pete, simon, hutchy, bobby etc). the resort is dying a death and i think i got out just in time. the lesson to learn is quite simple though 'treat people as you would expect to be treated' too many bars, tour companies, car hire, restaurants etc rip people off!! high prices for a s**t service is so disrespectful and people dont suffer it for long. this is a cancer called 'greed'. 'mr. greed' may seem to be your friend, but the s**ty, foul, putrid taste he leaves behind will come back to haunt you in time!! anyone with any good pics please send to me at borobro@aol.com i love and miss all my greek friends! the people of kardamena are in my heart till i die! i love you all (even the sea front b***hes)!

p.s someone take care of the plants!!
View 31 posts by Bernie B

I worked in Bernies from 2003 to 2004, i was the pr in the best bar in the resort with a fantastic team, miss the crew with a passion, you were like family,we did the things vthat  millions would dream about.oy pigole ! get in touch !

Hello to all my doggs out there!lol IF U R TRAVELLIONG TO KOS BETWEEN THE HOURS OF 6AM 27TH JULY AND 10PM 12 AUGUST BE READY FOR THE TIME OF YOUR LIFE IF U R LUCKY TO BUMP INTO ME! or any of the 24 heads wiv me or any of the other bout 15 i know gun be there. This summer aug 1st 2 weeks be banging. Hope to see many ladies and not too many geeza's. SO IF THERE R ANY BIG GIRLS GROUPS GOING OUT THERE CALL ME N LET ME NO in advance to stop me from worrying my little brain out. .07773150334

Bernies is no more. Now it's POISON. Draft Stella and Becks.Smooth tunes. Need i say more!

please tell me the stories of bernies being no more in summer 05 arent true! whateva takes its place will never live up the bernies reputation... altho that could be a good thing!!

loved working out there last summer, even if it wasnt in bernies. the trip to the castle was amazing even if it did scare me to f**k on the way up! cheers bernie, especially loved 'story time'!
View 9 posts by Hana

Bekky.... Seva is a very good call.... Adam you big mongo!! Where the hell have you been you baldy barnakle?? We were just talking about you some 4 days ago.... you are a photo-fit off crimestoppers!!

Hiya, cnt really make a comment on anyfink coz i ant bin yet, but was jst wonderin wot kos is like, gd places 2 go etc, goin 24th auguat 2005, well lookin 4ward 2 it, me n my 5 m8s! plz email me plz wiv gd places 2 go 2 get vvvv drunk 4 little money. Btw, were stayin in the seva appartments, wots they like? email me plz. beckyhunter9@hotmail.com

p.s ladies dont go in the toilets with any of these 3!!!

View 8 posts by Bernies B

had plenty of fun at this bar, aussie chris is cool but could kill bernie for all the tricks he played on us but love ya anyway xxxx