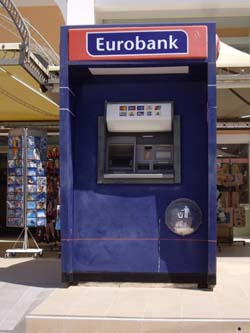 Ever wondered why there are so many ATMs on Kos these days? It's because the banks have discovered a trick of processing transactions in pounds instead of euros allowing them to use their own exchange rate, a process called Dynamic Currency Conversion (DCC). The table below shows the comparative cost of obtaining €100 from the most common ATMs if you follow the default option of processing the transaction in GBP, and looking at the receipts left behind by other customers most people are still letting the ATMs steal up to 10% of their holiday money.

If you ignore all the inevitable warnings and choose the other option to do the exchange in Euros, you will find that they will cost significantly less as the bank have to the use the Visa Exchange Rate in the transaction. This should apply to any ATM that you use and you must be given the choice. It's also a trick being used by some retailers and restaurants. It is generally accepted that if you are ever given the choice to make a card payment in GBP always decline the option and pay in Euros as you would expect.

All the rates were checked within an hour on the same Sunday afternoon in October 2019 using a Nationwide debit card which charged a £6.03 fee for transactions processed in Euros (included in the cost above). Transactions processed using DCC will not usually incur an additional UK charge unless you use a credit card. 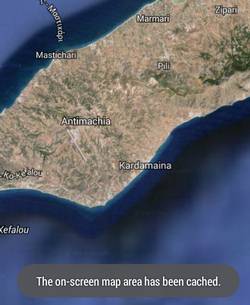 This will work on iPhone, iPad & Android mobile devices running an up-to-date version of Google maps. To make a map available for offline viewing just search for your desired location and get it up on your screen so that it only shows the area you want to save & put 'ok maps' into the search box. 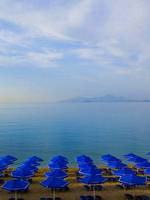 Kardamena is the best known resort on Kos. It spreads out along the island's eastern coastline about 40 minutes drive south west of Kos Town. The beach offers excellent clear water and safe swimming. It's covered with sunbeds near the resort centre, but becomes less crowded as you head off in either direction. The original village square and small fishing harbour are still at the heart of the resort, but they're now surrounded by tavernas and bars, ideal for anyone looking for fun in the sun. 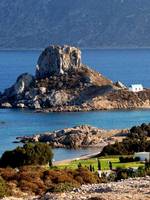 In contrast to the busy resorts of Kos Town and Kardamena, Kefalos is a very laid back resort. The bars, tavernas and holiday accomodation follow the beach along the curve of Kamari Bay. The tiny Kastri island, with its little blue and white church, sits in the middle of the bay. For the more adventurous, conditions here are ideal for windsurfers or you can catch a boat from the small harbour to the nearby sandy beaches of Paradise (Bubble Beach) and Magic just around the headland. 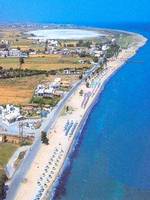 Set on a sweeping bay, this relaxed resort is just a 20 minute bus ride away from bustling Kos Town. The uncrowded sandy beach is ideal for swimming or sunbathing, the sand shelves gentley into the sea, and there is usually an onshore breeze to cool things down. Beachside tavernas are a great place to relax with a cold drink, and you'll find plenty of sunbeds, umbrellas and watersports here. Tingaki Nightlife is low key with some friendly bars, and a couple of disco bars. Those seeking more will find the bright lights of Kos Town are only a short taxi ride away. 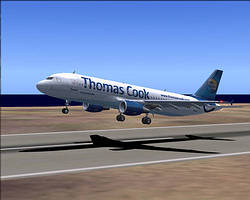 We've compiled a timetable of every flight from the UK to Kos in 2020. If you're looking for a flight that this will point you in the right direction and also let you know when to stop looking! It includes all the flights from the following airports:
Birmingham(BHX) Cardiff(CWL) Doncaster Sheffield(DSA) Glasgow(GLA) Gatwick(LGW) Manchester(MAN) Newcastle(NCL)

View all Beaches on Kos

View all Places to Visit

View all Car Rental on Kos